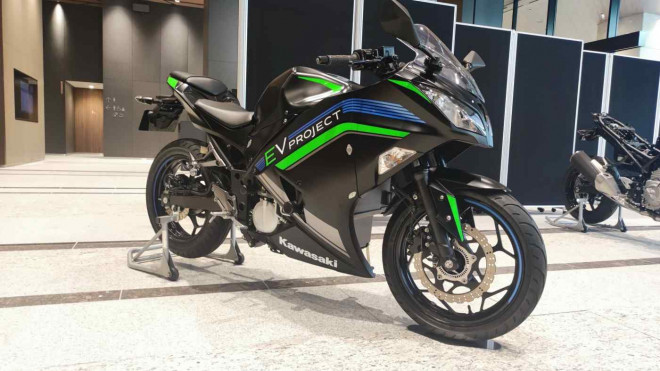 Currently, there are no electric Kawasaki motorcycles, but the company plans to introduce more than 10 electric models by 2025.

Motorcycles have long lagged behind in efforts to make vehicles more eco-friendly. Thus, Kawasaki Heavy Industries plans to switch to high-speed transmissions and produce all-electric vehicles for markets in developed countries in 2035.

However, some significant challenges lie ahead, such as cost, expansion range, as well as the experience of occupants on top of a roaring petrol engine.

Globally, the motorcycle market has cooled down, but the pandemic has sparked interest in ways of traveling that reduce the risk of infection, providing an opportunity to kick-start the sector.

To focus on the motorcycle business and capture a portion of this rising interest, Kawasaki Motors was separated from its parent company.

The new motorcycle company aims to boost sales to between 2.4 and 1 trillion yen ($9 billion USD) and raise operating profit margin to more than 8% from 6.1% in the fiscal year 2030 compared to the current financial year.

One of the main focuses of the company will be on being environmentally friendly. Currently, there are no electric-powered Kawasaki motorcycles, but the company plans to introduce more than 10 electric models by 2025. The goal is to completely switch to electric motorcycles by 2035 in Japan, Europe, and the U.S, Canada and Australia. The company plans to launch all hybrid and electric versions, while also planning to develop hydrogen-powered engines.

Kawasaki Heavy’s motorcycle sales reached 380,000 units in 2020. Although the global market share is only about 1%, Kawasaki already has a strong presence in Japan and North America mainly with luxury motorcycles. Global demand for motorcycles is about 44.5 million units in 2020. This is a 20% decrease in comparison with the previous year due to the pandemic. Kawasaki will seek to expand its market share by focusing on decarbonization, a goal that aligns with government policies around the world.

Honda holds the throne as the largest motorcycle manufacturer in the world. The company said it aims to decarbonize (remove bikes with carbon emissions) by 2050 but has yet to give a specific timeline. In addition, Yamaha Motor has set a target of making 90% of its motorcycles fully-electric by 2050.

Kawasaki Heavy’s electrification goals are more ambitious than those of its competitors, but the challenges are just as tough. It faces the same challenges as other brands in balancing the transition to electric vehicles. One of which is the cost of manufacture, especially with batteries making up a large portion of a vehicle’s price.

The new company will also focus on off-road vehicles that can run on sidewalks. Demand is growing for sports and agricultural vehicles in North America, and the company will invest 30 billion yen over five years in production facilities for them. Kawasaki will expand its production capacity at its factory in the US state of Nebraska in March 2023. A new factory will also be built in Mexico, with production due to begin in the fiscal year 2023.