Data from the National Office of Intellectual Property of Vietnam has just been updated to show that Pega – a manufacturer and distributor of electric motorcycles in Vietnam – is preparing a new model to compete against VinFast and Dat Bike.

After the controversial Pega S model, Pega is preparing to launch a new model with a design that resembles today’s high-end scooters. The brand has not announced detailed information, but the data recently updated by the Vietnam National Office of Intellectual Property has partly revealed the image of this model.

Specifically, the Industrial Property Official Gazette No. 415 has just been updated, showing that Pega has just registered an industrial design copyright for a completely new electric vehicle. The image posted in the document shows that Pega’s latest model has a modern and fashionable design in the style of European scooters.

This model is designed with large headlights. The front mask has a wide design that integrates a horizontal turn signal strip and a vertical air vent similar to the style of the Honda SH300. Wheels are quite large; the floor is flat while the saddle is monolithic and divided into two levels.

Most likely, this is a Pega scooter line aimed at male customers, competing with VinFast Theon, VinFast Vento, or the newly launched Dat Bike electric motorcycle.

The images on the data of the National Office of Intellectual Property of Vietnam also show that Pega’s model will also be equipped with a digital display in the shape of a propeller. Disc brakes on both wheels and the rear fork consist of two cylindrical springs.

Pega has not announced any information about this electric vehicle, but with the registration of design copyrights, it is likely this will be on the market soon. Previously, Pega had created quite a bit of controversy when it introduced its S model with the same design as Honda’s SH series. 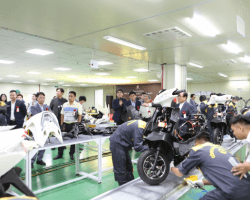 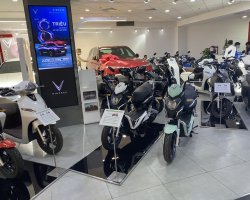 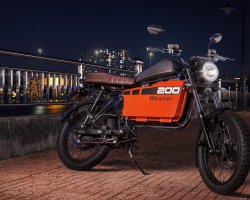 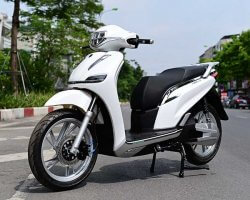