Sabeco and Habeco both had better business results in the second quarter, “recovering” compared to the first quarter, both with higher revenue growth than before.

The big man in the Northern beer industry, Hanoi Beer – Alcohol – Beverage Joint Stock Corporation (Habeco), has overcome difficulties thanks to drastically cutting operating costs. Therefore, the business results in the second quarter were brilliant with Habeco’s second quarter net revenue of VND 2,120 billion, down 13% compared to the second quarter of 2019. The gross profit in the period of the North beer giants reached 568 billion VND with the gross profit rate of 27%, not significantly different from the same period.

However, revenue from Habeco’s financial activities decreased to 29 billion from 43 billion in the second quarter of last year when deposit interest rates were adjusted to a low level. Currently, Habeco has 1,600 billion dong in term deposits from 3 to 12 months at the bank.

Total financial, selling, and administrative expenses decreased by 23% to 333 billion dong. The largest budget for sales was cut by more than 30%. In particular, costs for materials and tools; advertising, promotion; The reduction in loading, unloading and transporting is 50%.

As a result, Habeco’s second quarter pre-tax profit decreased only 4%, reaching VND271 billion. With a lower corporate income tax in the same period, the company’s net profit slightly increased by 2% to VND246 billion. This is even the highest profit margin in a quarter of Habeco in nearly 3 years since the fourth quarter of 2017.

This figure was much better than the last quarter, Habeco recorded an unexpected record when a net loss of nearly 100 billion, the biggest loss in the history of operations. But in the second quarter, Habeco recovered quickly when profit even increased over the same period.

Generally, in the first 6 months of the year, Habeco’s revenue reached 2,890 billion VND, a decrease of 28% compared to the same period in 2019. Profit after tax of the Northern alcohol company after 2 quarters was 147 billion VND, down 51%. Compared to its 2020 business plan, Habeco has fulfilled 68% of its revenue target and 59% of its profit for the whole year.

Habeco’s actual profit is much higher than the 100 billion estimate shared by management at the end of June’s annual shareholders’ meeting. According to Habeco Chairman Tran Dinh Thanh, if everything goes well, With favorable objective conditions, Habeco’s business and production situation in the last 6 months of the year will be maintained well.

However, Habeco in particular and alcohol businesses in general continue to face challenges when translating COVID-19 returns. Da Nang is becoming a center of outbreaks and must be socially isolated. Meanwhile, Hanoi and Ho Chi Minh City have requested some types of non-essential service businesses such as discotheques, bars, and karaoke to be suspended; Limiting events with large crowds.

At the annual meeting, Habeco Chairman Tran Dinh Thanh, assessed that COVID-19 epidemic has only a short-term impact on the beer consumption market. In the long run, Decree 100 will have more effects. According to Mr. Thanh, “It is unpredictable whether Habeco’s business situation can recover to pre-translation levels and before Decree 100”.

Sabeco is determined to improve the difficult situation

Sabeco is currently the enterprise with the largest market share in Vietnam’s beer industry with more than 40%, Habeco ranks third with 18%. According to the company leaders, the share of the situation has been much improved due to the 70% growth compared to the first quarter and the Company thinks that it is regaining growth momentum when the market recovers from the pandemic.

Gross profit margin improved significantly, from 26.5% to approximately 31%. The accumulated first half of the year revenue decreased by 35%, reaching 12,040 billion dong. On average, the company collects more than 2,000 billion VND per month, of which beer contributes about 89%, the rest comes from packaging materials, soft drinks, alcohol.

Profit after tax also grew negative 2 digits, reaching only 1,930 billion VND. Sabeco management at the beginning of the year foreseen the difficulties, so it targets net revenue of 23,800 billion dong and profit of 3,252 billion dong, down by 37% year-on-year.

This year, Sabeco sets a target of 23,800 billion dong in revenue and 3,250 billion dong in profit after tax with the prospect of the beer consumption market facing many difficulties. Compared to this plan, the Company completed 51% of the revenue target and 59% of the profit after half a year. In a reply earlier this year, Mr. Bennett Neo, Sabeco’s General Director, stated that Sabeco would try to fulfill its goals. To maintain the market as well as desire to grow sales at the end of the year, Sabeco spent 766 billion dong after the first 6 months of the year on advertising, marketing, support, and business activities.27% higher than the first half of 2019 with the hope of accelerating in the second half of the year.

The year-end plans that Sabeco and Habeco set out will still change many times depending on the situation of the epidemic in the coming time. 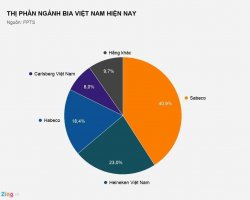 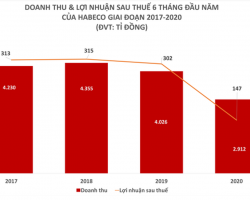